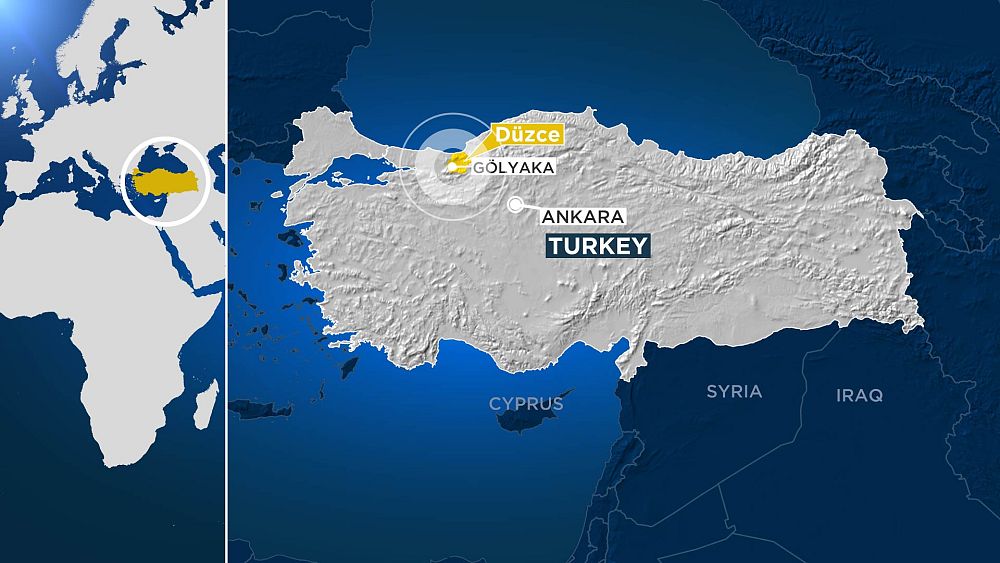 A magnitude 5.9 earthquake hit a town in northwest Turkey early on Wednesday, causing damage to some buildings and widespread panic and injuring at least 50 people, mostly while they tried to flee their homes.

The earthquake was centred in the town of Gölyaka, in Düzce province, some 200 kilometres east of Istanbul, the Disaster and Emergency Management Presidency said.

It struck at 4:08 am (2:08 CET) and was felt in Istanbul, in the capital Ankara and other parts of the region. Dozens of aftershocks were reported, including one magnitude of 4.3.

The quake woke people from their sleep, and many rushed out of buildings in panic in the province that has experienced earthquakes in the past.

At least 50 people were treated in hospitals for injuries, mostly sustained during the panic, including from jumping from balconies or windows. One of them was in serious condition, Interior Minister Süleyman Soylu told private NTV television.

“We almost completed our checks in the villages around Gölyaka. There is no severe damage reported; only some barns were wrecked in these places,” Soylu said on the state-run broadcaster TRT Haber.

“There was a power cut during the quake but authorities are reinstating power now,” he said.

Power was cut in the region as a safety measure, the minister said.

The quake demolished the exterior cladding and parts of the roof of a courthouse in Düzce, HaberTurk television reported. Among other damage, a two-story shop collapsed on a narrow street, it said.

In Gölyaka, people gathered in the main square, some wrapped in blankets distributed by the emergency management agency, television footage showed.

Düzce Governor Cevdet Atay said schools in the region were being closed as a precaution.

Around 800 people were killed in a powerful earthquake that hit Düzce on 12 November 1999.

In August of that year, 17,000 people were killed by another powerful quake that devastated nearby Kocaeli province and other parts of northwest Turkey.

Officials said around 80% of the buildings in the area were rebuilt or fortified following the 1999 earthquakes, which helped minimise damage.

Turkey sits on top of major fault lines and is frequently shaken by earthquakes.

Avoid being trapped in a crowd during the Christmas holidays

We’re all excited to spend our holidays next to our loved ones and gather around the Christmas table for delicious...

Canadian police said it is investigating "all criminality" related to such activities. (File)Washington: The Canadian Royal Mounted Police announced that...

Comment on this storyCommentKYIV, Ukraine — An overnight rocket attack struck a hospital maternity ward in southern Ukraine, killing a...

Nepal Prime Minister Sher Bahadur Deuba was elected on Wednesday with a huge margin of votes for the House of...

Kremlin on alert after Crimea hit by ‘drone attack’

The authorities in Russia-annexed Crimea claim to have repelled two drone attacks on the peninsula - one of which was...